At some point recently, the indicator on my dashboard started complaining about a tail light problem, specifically that the bulb was gone. Pretty standard, right? Except it was intermittent. I'm not especially mechanically minded, and I try not to mess with my car too much in case I do more harm than good.
However, half an hour of searching later it looked like it was going to be a little more serious than a simple loose connection, and I went through the process of taking everything out and unplugging the actual tail light so I could see what the problem was. 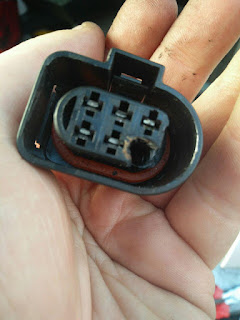 It turns out that the seal on the tail lights isn't great, and it's not uncommon for water and general moisture to get in, and can get bad enough that it gets into the socket and ending up something like the above. The metal pin used for the corner socket had completely disintegrated from the inside of the tail light once I unplugged it.

Since at least one of the pins in the light was gone and others looked to be going soon, I ordered a new tail light, which was fairly reasonably priced, and sourced a new plug like the above. Or I thought I had. They looked identical but since I couldn't determine a part number I assumed that ordering something that looked the same off eBay would solve the problem. On the plus side I have another spare for whenever whatever that plug type is used for encounters a similar problem. Another attempt however was successful after finding the part number hidden on a forum somewhere. 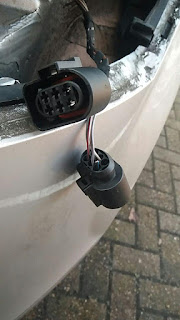 I slowly transferred the wires from the broken plug to the new one to avoid mistakes with wires going into the wrong place. It needed a small tool to pinch the wires out of the previous plug so that they could be moved over. 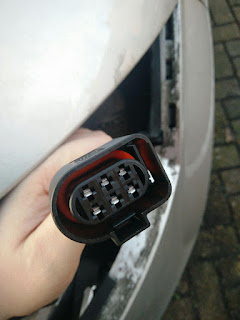